“We live in an age of old and unprintable hatreds that suddenly spring back to life; and if there is a playwright born for that moment, it’s David Ireland,” says Joyce McMillan co-convenor of CATS. “In Ulster American he whips up a tragi-comic storm of razor-sharp, taboo-busting dialogue that spirals shockingly towards violence; and Gareth Nicholls’s superb, fast-moving Traverse production combined with three terrific performances from Lucianne McEvoy, Robert Jack and Darrell D’Silva to create one of last year’s huge smash hits.”

Perth Theatre’s production of Lost at Sea, Morna Young’s play inspired by the loss of her father at sea when she was a child, picked up two awards, Best Director (Ian Brown) and Best Ensemble.

“Morna Young’s Lost at Sea is a requiem to the fishermen of the North-East who perished in the waves. Almost operatic in construction, the voices of the ensemble, individually and as a chorus, create an unforgettable portrait of the hardships and heartbreak faced by the fishing community.”

Joy Watters, Across the Arts

Meanwhile, the Best Male Performance award went to Holby City/Taggart star John Michie for his memorable performance as the senior fire officer suffering from severe post-traumatic stress after the first fire at the Glasgow School of Art in Rob Drummond’s The Mack (A Play, a Pie and a Pint at Oran Mor, presented in association with the Traverse Theatre).

“John Michie played the role of the traumatised fire commander with a heart-wrenching dignity and subtlety. His performance conveyed with reverberative power the emotional reckoning of a stoical, west of Scotland man who, following the first fire at the Glasgow School of Art, is finally brought down by a career’s worth of trauma.”

Mark Brown – The Herald on Sunday, the Sunday National and the Daily Telegraph

Red Bridge Arts, the North Queensferry-based company, scooped the Best Production for Children and Young People award for the third year in a row, this year for Stick by Me co-produced with Andy Manley and Ian Cameron.

The awards were presented by one of the giants of Scottish Theatre, Giles Havergal, whose 81st birthday the CATS also celebrated at the event.

Elsewhere in the awards Best Design was won by Shona Reppe, Ailsa Paterson, Selene Cochrane and Chris Edser for Baba Yaga, the international co-production between Imaginate (Edinburgh) and Windmill Theatre Company (Adelaide, Australia). The Best Technical award was picked up by The End of Eddy, the Untitled Projects and Unicorn Theatre co-production, and Best Use of Music and Sound went to Birds of Paradise and the National Theatre of Scotland for My Left Right Foot – The Musical.

“This has been another bumper year for theatre produced in Scotland,” says CATS co-convenor Mark Fisher. “This was reflected in the large number of productions that were eligible for the awards and in the spread of winners between so many different companies.”

“It was tremendous to welcome Giles Havergal as our guest presenter,” he adds. “Giles made an unrivalled contribution to Scottish theatre in his over 30 years at the helm of the Citizens, which helped lay the foundations for so much of the work produced in Scotland today.” 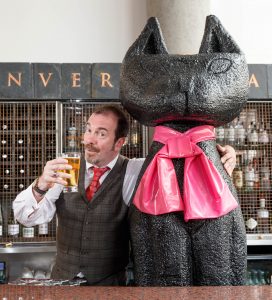